Sonic Blossom, created in 2013 after the artist’s mother underwent an invasive surgery, explores the connection between two beings, and how that relationship can be altered by the offering of a transformational gift.

My name is Anna Sadofsky, and I have been working at DHC/ART since August 2016. For the exhibition L’OFFRE, I act as a caretaker for the singers performing in Sonic Blossom by Lee Mingwei. My participation in this piece allows for the singer to maintain a position of a demigod, acting as somewhat of a buffer between the singer and the recipient. I have been fortunate enough to witness and experience the power of the performance firsthand, and have engaged in conversations with all of the singers to reflect on this magical piece.

Camille Brault: This is a special performance because yes, I’m in a role, but maintaining my own persona Camille while embodying this role is important, because I need to make that personal connection. On stage [in previous roles], my character has to overshine my personality, unlike in Sonic Blossom. Each time I ask myself how I feel when I listen to the songs, I listen to the colours of the words, and think of how I can try to use nuances to give back the feeling that I feel while singing. Sometimes I change things up, because the person receiving the gift is always changing, so my perception of the song can change too. A role at the opera is usually a mythological person or someone that a group of people have already impersonated, whereas in this performance I’m the first person to sing these songs as me.

CB: First of all, the cloak is a life-size origami piece and it’s beautiful. The first thing that struck me was its weight, and I think that works with the concept of it transforming you into a demigod, as you can’t walk in the same way or move in the same way as you could with regular clothes. I can't move my arms or walk in a normal way, so it causes me to stand up straight and regally that makes people feel as though I’m special prior to singing. The colours and the material are out of the ordinary for North America, and maybe other places in the world people wouldn’t be as shocked because it’s more in the norm, but here it gains a lot of attention because of how uncommon it is. It’s a very comfortable yet uncomfortable garment, because if its restrictions, but those factors also make me feel like a demigod. People can’t touch me, I can’t even touch the gown without special gloves, it helps me to become a different Camille, a different person. I don’t think this performance would have the same effect without the garment. 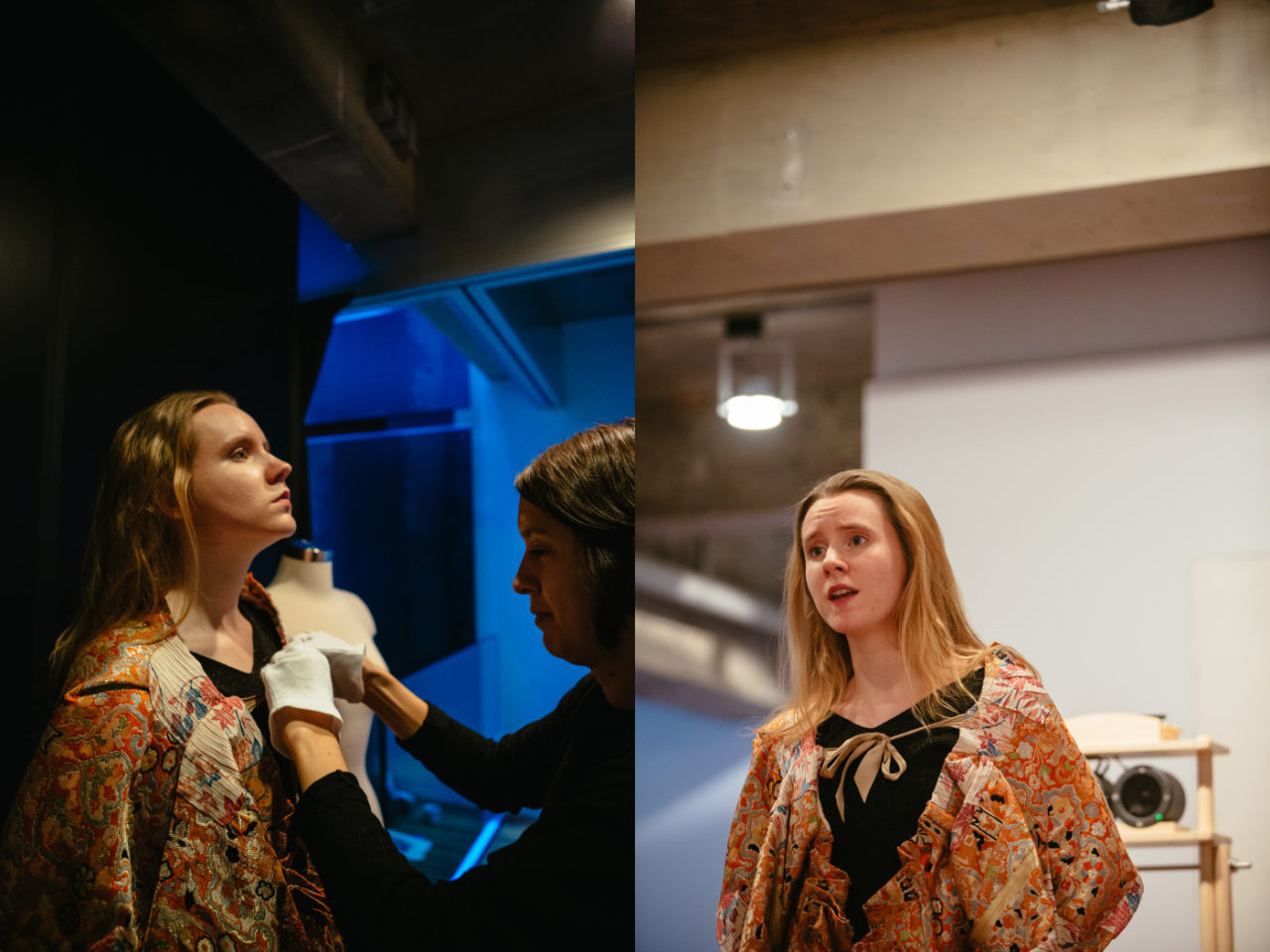 CB: That’s the most important part of the performance, where it came from. The choice of Schubert is important because he uses his music to touch you in many ways, people who aren't familiar with classical music still feel that, because Schubert considered human beings while composing and wanted to give back that feeling that he felt. The feeling of love and physicality, poetry and self-doubt. People react very differently once they find out about the origin, but before they do they sometimes act awkwardly. I love that moment as well because it shows the fragility of humans. I’m invading into people’s intimacy, and I think that is the purpose of the work, awaking this simple and human feeling inside everyone by allowing them to respond as they want to, by walking away, filming us, or even saying no.

CB: I have to say that my most beautiful moments aren’t with people who have a background in those fields, or with people who don’t. Sometimes people with the backgrounds are over analytical of the exchange, but sometimes they have such a great appreciation for the technical side of the work. Sometimes people feel the need to justify their reactions by disclaiming their position in those fields.

Unbeknownst to the visitors, you were initially planning to take part in the Sonic Blossom piece when it was shown at The Metropolitan Museum of Art in New York City in 2015. Now that you’ve participated in the exhibition L’OFFRE, how do you feel that the intimacy of the gallery affects the overall piece? Do you feel as though performing in a larger space would change the experience for you or the receiver?

CB: Indeed, while I was living in NYC, I was about to be part of Sonic Blossom at the Met Museum. It never happened for visa reasons. I have been to the Met while some of my colleagues performed though! It is, indeed, a very different setting. In NYC, pretty much every performance was a concert. People were attracted by the voice and gathering in the big space where the performance was taking place. At DHC/ART, I would say the atmosphere is much more intimate. Most of the time, we are alone in the space with the person we chose [to sing to]. This creates a very special vibe. However, this performance and the setting are so powerful, that the size of the room does not really affect the strength and the intensity of the gift. Even when a lot of people are on the 4th floor at DHC/ART, everybody is so quiet (most of the time!) that we almost forget the space because of this connection we create with the receiver. The most important thing to me is not the size of the room, but the space between the chair [the visitor] and me, and the energy that is coming from looking in the receiver’s eyes, without never letting go of the tension.

Often, people tell me after the performance that they actually forgot where they were, that besides us, nothing really mattered anymore, and I think it is the most powerful point in Lee Mingwei’s artwork; he brings you to a place where it is sometimes hard to stay; in the present moment. And for a few minutes, you cannot really run away from it, and it feels good to face this and let yourself go, even if it can be hard sometimes, both as giver or receiver. 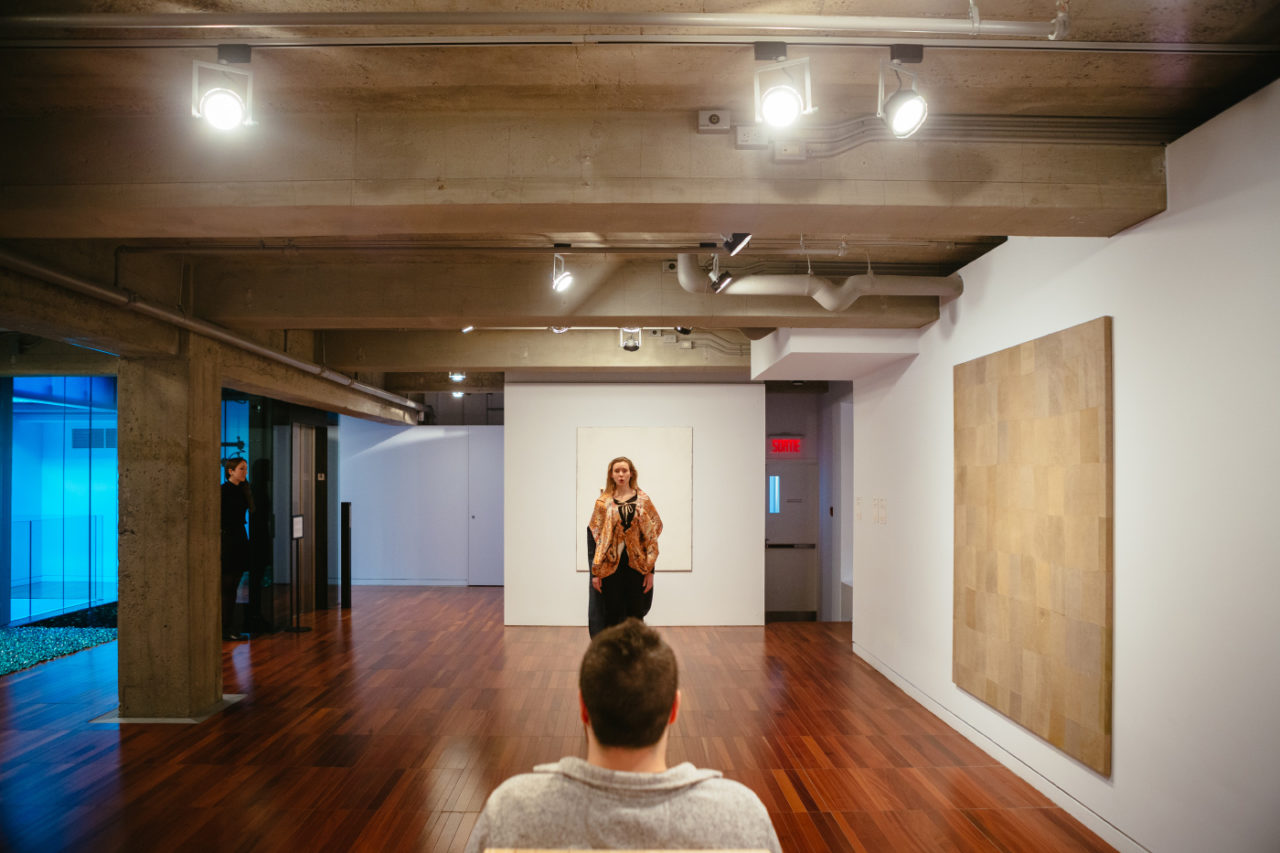 CB: One time, in November, this couple came in and I saw them from the greenroom, and I knew immediately I wanted to sing to them. They were immediately so open and excited, and I sang Duh Bist die Ruh. They were timid at first and even after the performance, but after a few minutes of conversation the man began to cry, and I realized I had touched something special. The woman mentioned that he used to sing classical music, and this showed me the power of the human voice and how magical it can be. They ended up sending an email to DHC/ART after, thanking me, the Foundation and the artist for giving them that experience. Another beautiful moment that I often think about, a man came in in a beautiful suit with his son, and he accepted my gift. He cried for the duration of the song, and you could tell that he was touched in a way he hadn’t been before. The son was watching his father, not me at all, and you could see that he saw some sort of softness in his father. After the song was finished they hugged, and had such a beautiful moment that I spoke to them briefly before letting them share that experience together.