RELATIONS: Diaspora and Painting – Panel Discussion with the Artists (2/4)

In conjunction with the exhibition RELATIONS: Diaspora and Painting, the PHI Foundation presents a series of conversations with artists from the exhibition. This series will be divided into four events during the course of the exhibition.

Join us for the second panel discussion with Larry Achiampong, Ed Pien and Marigold Santos, hosted by James Oscar and followed by a Q&A session moderated by Rihab Essayh.

Larry Achiampong
Drawing on his Ghanaian roots, Larry Achiampong’s solo and collaborative projects employ imagery, aural and visual archives, live performance, and sound to explore ideas surrounding class, cross-cultural, and post-digital identities. With increased sharing of information via the Internet, the idea of a one-size-fits-all version of history continues to be challenged and rewritten. Achiampong crate-digs the vaults of history, and splices the aural and visual qualities of personal and interpersonal archives, offering multiple perspectives that reveal the sociopolitical contradictions in contemporary society. Achiampong’s works examine his communal and personal heritage—in particular, the intersection between pop culture and the postcolonial situation, using performance to investigate “the self” as a fiction and devising alter-egos pointing toward divided selves.

Rihab Essayh
Born in Casablanca (Morrocco), Rihab Essayh obtained her BFA in studio arts and art education at Concordia University in 2017 and is currently pursuing her MFA in studio arts at the University of Guelph. Essayh is a multidisciplinary artist with auto-ethnography documentation process and transformed through a research-based methodology, basing and referencing the current state of cultural anthropology. Employing an immersive approach, her installation artworks serve a contemplative gaze of contemporary interpersonal issues. Her works was presented at Never Apart, at Conseil des arts de Montréal, at Fofa Gallery and Art Souterrain festival. rihabessayh.com

James Oscar
James Oscar is a writer, art critic, curator, and presently a researcher in the sociology and anthropology of art at the Institut National de la Recherche Scientifique. His work explores how the complexities of identities and social forms (human and non-human) are disseminated in visual, literary, and performative arts. He initially studied literature and social thought with the African philosopher Ato Sekyi-Otu, then cinema with the late director Irving Kershner and then moved onto studying critical thinking very closely under the poet Édouard Glissant. He was a curatorial consultant for the Montreal Museum of Fine Arts “From Africa to the Americas: Face-to-Face Picasso, Past and Present”. His regular public lecturers at museum, art and academic institutions and conferences include most recently “Eternal Hegemony of the Canadian Academic Mind and Space: Of Voice,  Secret Interference, and ‘Academic Whiteness’“ (Conference - “On the Notion of Having Voice in Social Research”, May 2020, INRS) and “An Art Historical Visual History of Stares: The Stares of Anxious Audiences, of Black Lives, of Raw Lives, and the Regards of the Radiant” (The Power Plant Contemporary Art Gallery, February 2020). His latest book contributions include “Peeping Through the Ice-Holes into the Impossible-Sublime” (Montreal: CCOV, 2019), “The Crux Is Never Human All Too Human: The Many Worlds of Dana Michel” (Finland: Julkaistu, 2019), the forthcoming «(Black) Bodies as Surfaces in the Urban Context?» (McGill University: Centre for Interdisciplinary Research on Montreal - Digital Journal, August 2020), “Barkley L Hendricks’s Eternal Sunshine of the Radiant Mind” (PHI Foundation, 2020) and “The Denizen Who Inhabit Ancient Evenings in the Season of Contempts” (in Rashid Johnson: Anxious Audience, Power Plant Contemporary Art Gallery, 2020.

Ed Pien
As a Taiwanese-born who lives in Canada and has experienced marginalization, through his work Ed Pien celebrates diversity and seeks to champion those who have less autonomy and agency. He is interested in the myriad ways in which different cultural systems impact who we are and how, as individuals, we can negotiate and act in the world in responsible, respectful, and empathetic ways. In the process of researching and making art, Pien contemplates notions of loss, mourning, empathy, resilience, and healing. In his work, he gravitates toward creating immersive installations and fostering moments of curiosity, wonder, and enchantment for viewers of his art. Pien employs strategies of display that heighten these qualities. The powerful role played by museum archives, the affect of material evidence, the persuasive power of images and artifacts, the ways in which they are presented to help constitute collective memory, the impact of officially constructed narratives, and how they influence interpretation and elicit responses from visitors all influence Pien’s thinking and making. Fundamentally Pien aims to realize poetic, engaging art that is imbued with emotional, physical, and conceptual resonance.

Marigold Santos
Marigold Santos pursues an interdisciplinary art practice involving drawn, painted and printed works, as well as sculpture, animation and sound. When she first immigrated to Canada, she lost touch with her culture. But now, identity is what empowers her. Santos’s interest lies in transformation, as she reflects on fleeting childhood memories and her family’s immigration to Canada as an autobiographical point of departure. Experiences as history, fragmented into memory and retold as personal myth are negotiated through the act of drawing but also operate as narrative. This is the realm of play in which Santos situates her work. Notions of attachment/ separation and being grounded or uprooted ultimately relate back to investigations of “self” and “home” and are explored through an invented temporality (wherein the artist looks forward, sideways, and upside-down while simultaneously looking backward into a history never physically lived) manifesting in conceptual hybrids and multiple, distributed selves. In these recent works, imagery arises from the otherworldly; figures mobilize and embrace growth, transience and a self in process. The works provide loopholes as points of entry, which make the viewer aware of the contradictions that dwell within but do not seek to ameliorate awkwardness or discomfort. Santos draws her imagery from ambiguity and a lack of absolutes, resulting in a visual narrative that is disjointed, accumulative and plural. It has become Santos’s personal language for storytelling, a language that continues to change and evolve, that is constantly being defined by the relationship of one image to the next, and that embraces precariousness. 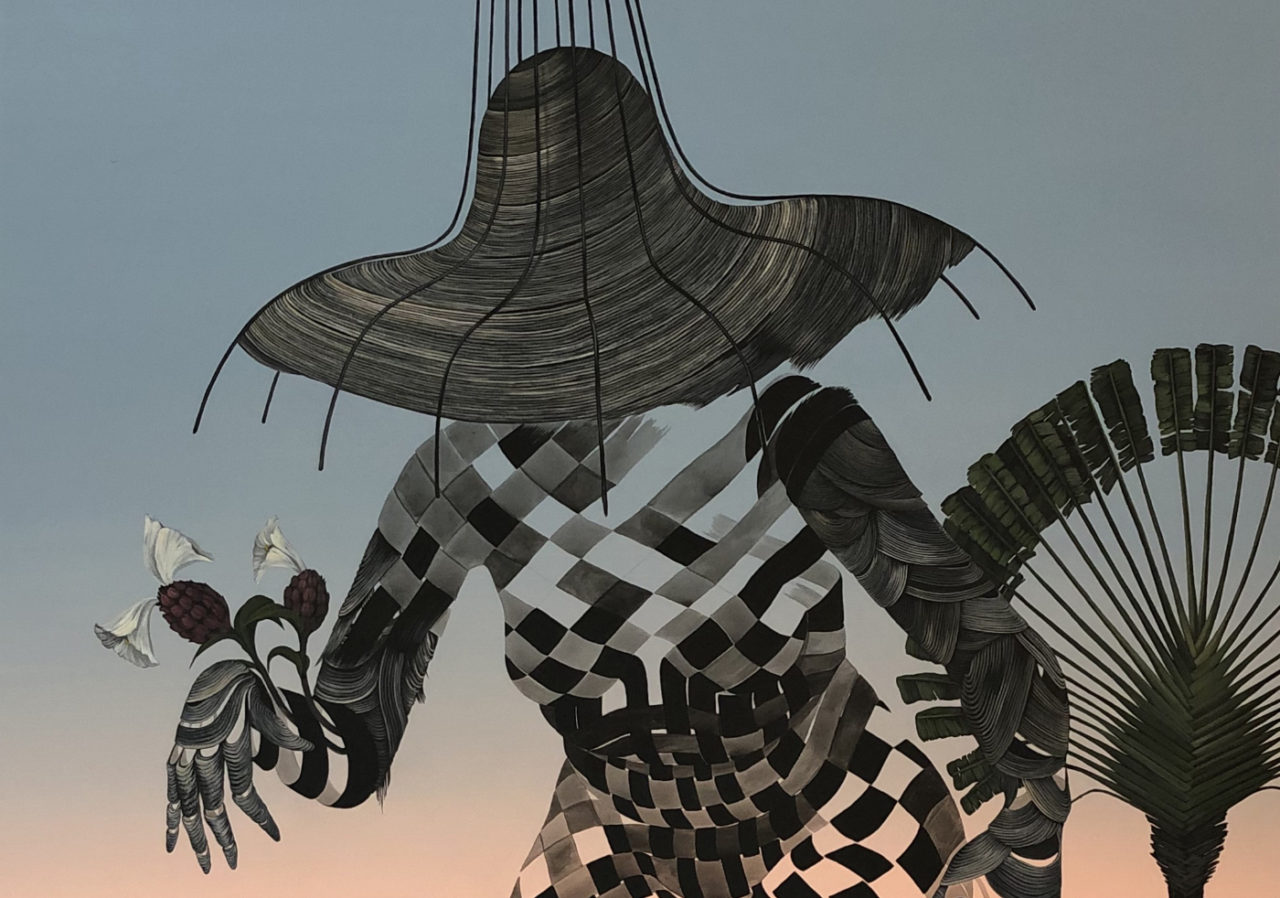 Panel Discussion with the Artists 2/4 – RELATIONS