RELATIONS: Diaspora and Painting – Panel Discussion with the Artists (1/4)

In conjunction with the exhibition RELATIONS: Diaspora and Painting, the PHI Foundation presents a series of conversations between curator Cheryl Sim and artists from the exhibition. This series will be divided into four events during the course of the exhibition.

In addition to this panel, discover one-on-one discussions about each artist’s work, between the curator and artists Maia Cruz Palileo, Rick Leong, Manuel Mathieu, Rajni Perera, and Curtis Talwst Santiago. These will be available on our website in the next few weeks.

Maia Cruz Palileo
Maia Cruz Palileo is a multidisciplinary, Brooklyn-based artist. Migration and a permeable conception of home are constant themes in her paintings, installations, sculptures, and drawings. Influenced by the oral history of her family’s arrival in the United States from the Philippines, as well as the history shared by the two countries, Palileo infuses these narratives with memory and imagination. When stories and memories are subjected to time and constant retelling, such narratives become questionable, straddling the line between fact and fiction while remaining cloaked in the convincingly familiar. Palileo spent the summer of 2017 researching images from the US colonial period in the Philippines at Chicago’s Newberry Library. She studied Damián Domingo’s watercolours of people living in and about Manila in the 1820s,folklorist and revolutionary Isabelo de los Reyes’s 1889 book El Folk-lore Filipino, and the Dean C. Worcester collection of ethnographic photographs from the years 1899–1903. Worcester was an American zoologist who became Secretary of the Interior for the United States government. His collections encompass multiple perspectives on the events of the nineteenth century, including the Philippine Revolution and the Philippine-American War. Together, they present an image of Filipinos as constructed both through native eyes and the eyes of the other. This phenomenon mirrors the fractured feeling of multiplicity and shallowness that many of Palileo’s generation describe when asked about Filipino-American identity and historical understanding.

Rihab Essayh
Born in Casablanca (Morrocco), Rihab Essayh obtains her BFA in studio arts and art education at Concordia University in 2017 et is currently pursuing her MFA in studio arts at the University of Guelph. Essayh is a multidisciplinary artist with auto-ethnography documentation process and transformed through a research-based methodology, basing and referencing the current state of cultural anthropology. Employing an immersive approach, her installation artworks serve a contemplative gaze of contemporary interpersonal issues. Her works was presented at Never Apart, at Conseil des arts de Montréal, at Fofa Gallery and Art Souterrain festival. rihabessayh.com

Rick Leong
Rick Leong’s painted landscapes are rooted in a bilingual vocabulary and style. Drawn from observation and influenced by classical Chinese paintings, imagery, and symbols, his large-scale paintings incorporate a holistic view of the Canadian landscape and the artist’s relationship to it. Leong’s pursuit and recording of nature abides by the terms of traditional landscape painting, a strategy by which he disseminates an ongoing relational narrative. With attention to environmental changes in botany—such as temporal and meteorological conditions—the artist reimagines the natural world. Light becomes solid and massive, and rainbows become architectural. One is tempted to dwell in the poetry of experience. Painting no longer requires that the artist work solely from memory. What is not remembered accurately is invented, forming a synthesis of inspiration, observation, memory, and imagination.

Manuel Mathieu
Montreal-based multidisciplinary artist Manuel Mathieu is known for his paintings, which investigate themes of historical violence and erasure, as well as Haitian visual cultures of physicality, nature, and religious symbolism. Marrying abstract and figurative techniques, his compositions carve out space for us to reflect on Haiti’s transformative history, while inviting us to consider the different futures that the act of remembering creates. Drawing from a wide range of subjects, Manuel’s practice combines his Haitian heritage with his formal art education, which culminated in an MFA from Goldsmiths, University of London.

Rajni Perera
Rajni Perera explores issues of hybridity, sacrilege, irreverence, the indexical sciences, ethnography, gender, sexuality, popular culture, deities, monsters, and dreamworlds. All of these themes come together in a newly objectified realm of mythical symbioses. They are flattened on the medium and made to act as a personal record of impossible discoveries. In her work, Perera seeks to open and reveal the dynamism of these scripturally existent, self-invented, and externally defined icons. She creates a subversive aesthetic that counteracts antiquated, oppressive discourses and acts as a restorative force through which people can shift outdated, repressive modes of being and reclaim their power.

Curtis Talwst Santiago
The spare, gestural paintings of Curtis Talwst Santiago—a Trinidadian-Canadian artist best known for his miniatures housed in jewelry boxes, often credited to his moniker Talwst—depict lush, tropical landscapes and crude self-portraits in pastel, spray paint, charcoal, oil, and watercolour. Parktown, titled after a neighborhood in Johannesburg where the artist has spent time, centres on a purple goddess presiding over an azure pool and a potted plant—a space of spiritual replenishment surrounded by a barbed-wire fence. Together, these artists manifest worlds in which the psychic costs of diaspora are made material, offering latitude where personal and historical memory can be reckoned with. 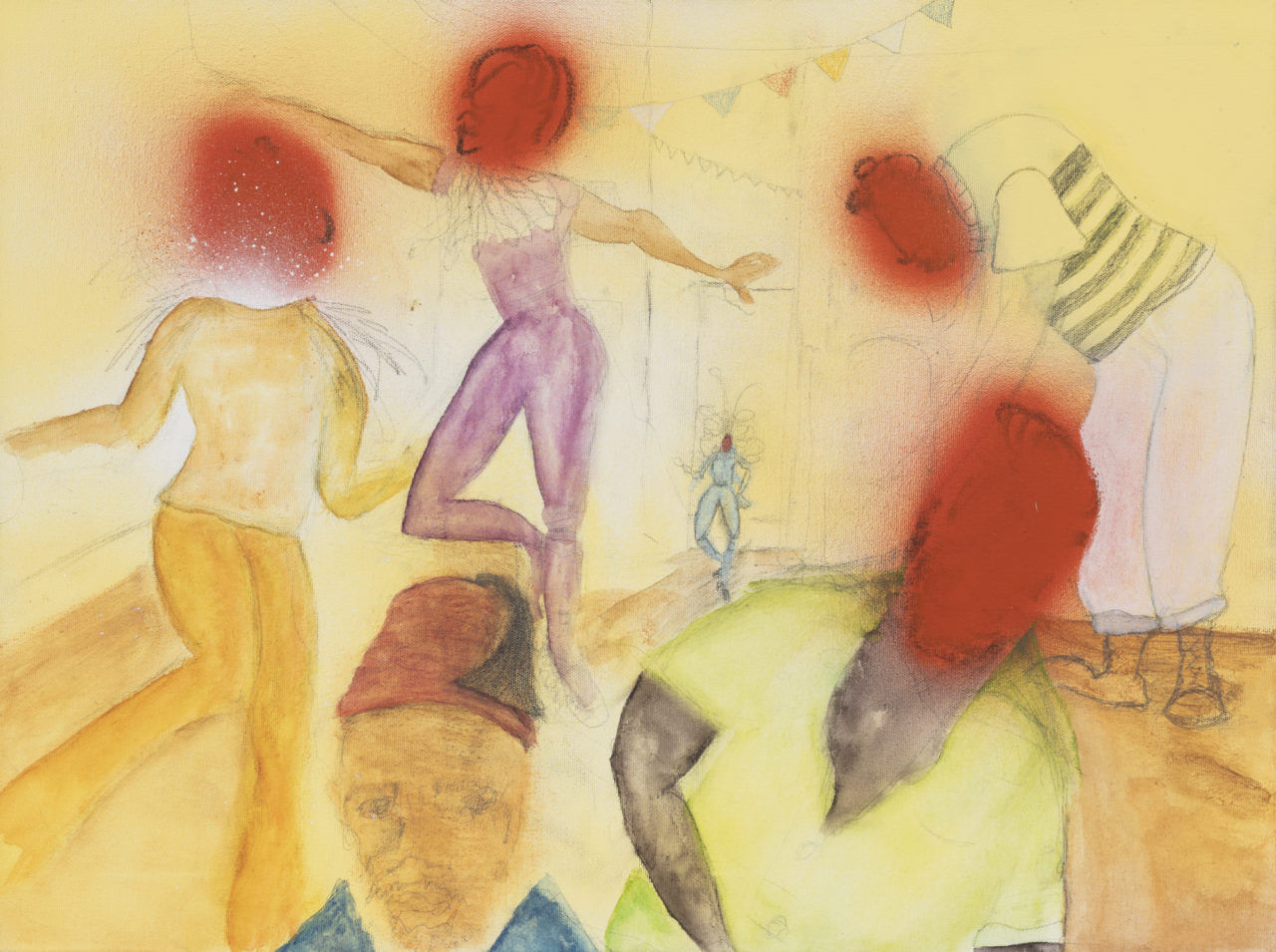 Panel Discussion with the Artists 1/4 – RELATIONS