A Magical Substance Flows Into Me by Jumana Manna

A Magical Substance Flows Into Me opens with a crackly voice recording. The voice is that of Dr. Robert Lachmann, an enigmatic Jewish-German ethnomusicologist who emigrated to 1930s Palestine. While attempting to establish an archive and department of Oriental Music at the Hebrew University, Lachmann created a radio program for the Palestine Broadcasting Service called Oriental Music, where he would invite members of local communities to perform their vernacular music. Over the course of the film, Jumana Manna—herself a Palestinian from Jerusalem—follows in Lachmann’s footsteps and visits Kurdish, Moroccan and Yemenite Jews, Samaritans, members of urban and rural Palestinian communities, Bedouins and Coptic Christians, as they exist today within the geographic space of historical Palestine. Manna engages them in conversation around their music, while lingering over that music’s history as well as its current, sometimes endangered state. She asks these individuals to perform, and they do. Intercutting these motley encounters with musicians, are a series of vignettes of Manna interacting with her own parents in the bounds of their family home. In fact, the domestic is a trope that is littered throughout this film with recurring kitchen, living room, and elevator scenes. In Manna’s metaphorical excavation of an endlessly contested history, the film’s preoccupations include: the complexities embedded in language, as well as desire and the aural set against the notion of impossibility. Within our hackneyed one-dimensional ideas about Palestine/Israel, this impossibility becomes itself a trope that defines the Palestinian landscape. –Negar Azimi

The screening will be followed by a conversation between curator and writer Nasrin Himada, and musician and record producer Radwan Ghazi Moumneh on the history of Arabic music and its relation to art, cinema and performance.

A Magical Substance Flows Into Me
Directed by Jumana Manna
68 min, HD video, 2015

Please note that the film and the conversation will be in English. Limited number of seats: first come, first seated.

Jumana Manna is a Palestinian artist working primarily with film and sculpture. Her work explores how power is articulated through relationships, often focusing on the body and materiality in relation to narratives of state building, and histories of place. Manna received a BFA from the National Academy of Arts in Oslo and an MA in Aesthetics and Politics from California Institute of the Arts. She has participated in multiple festivals and exhibitions, including the Viennale International Film Festival, BAFICI, IFFR Rotterdam, Tate Modern, Marrakech Biennale 6 and The Nordic Pavilion, 57th Venice Biennale. Her 2015 documentary A Magical Substance Flows Into Me (premiered in Berlinale Forum, 2016) won Films on Art Competition, at the New Horizons International Film Festival, Wrocław. Manna was awarded the A.M. Qattan Foundation’s Young Palestinian Artist Award in 2012, the Ars Viva Prize for Visual Arts and was nominated for the Preis der Nationalgalerie für junge Kunst in 2017.

Radwan Ghazi Moumneh is a Lebanese/Canadian musician and record producer splitting his time between Beirut and Montréal. Focusing on morphing and re-interpreting Arabic music and culture, he presents his performances under the moniker “Jerusalem In My Heart”. JIMH is a live performance project focusing on experiencing the ephemeral in a live analog film installation setting, presenting a contemporary reiteration of the culture of the Levant. He is the co-owner of the recording studio Hotel2Tango in Montreal, where he works on most of his production work, and releases his albums on Constellation Records in Montreal.

Nasrin Himada is a Palestinian writer, editor, and curator based in Tio’tia:ke (Montréal), in Kanien’kehá:ka territory. Their writing on contemporary art has appeared in Canadian Art, C Magazine, Critical Signals, The Funambulist, Fuse Magazine, and MICE Magazine, among others. They are the co-editor of contemptorary.org. 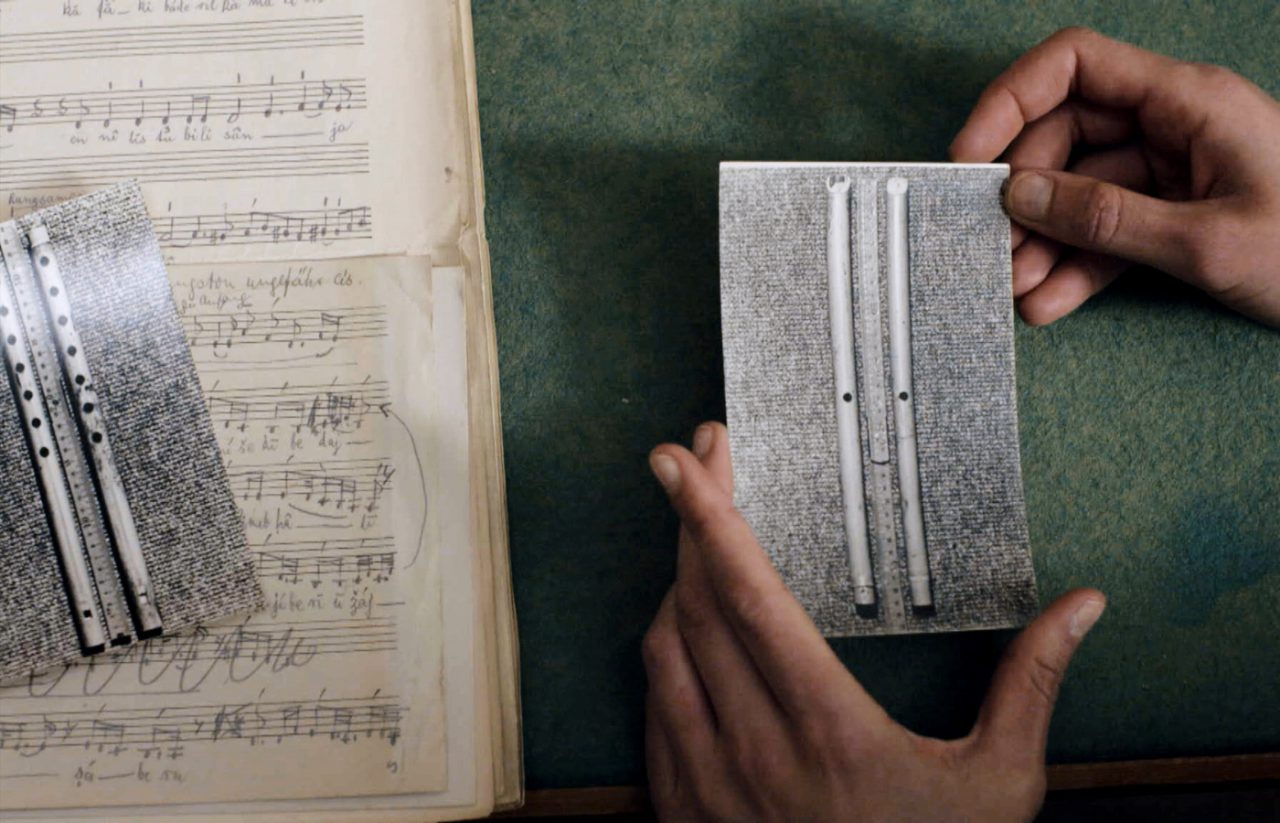 Jumana Manna
A Magical Substance Flows Into Me (video still), 2016
Co-commissioned by the Sharjah Art Foundation and Chisenhale Gallery with Malmö Konsthall and the Biennale of Sydney
Courtesy of the artist and CRG Gallery, New York