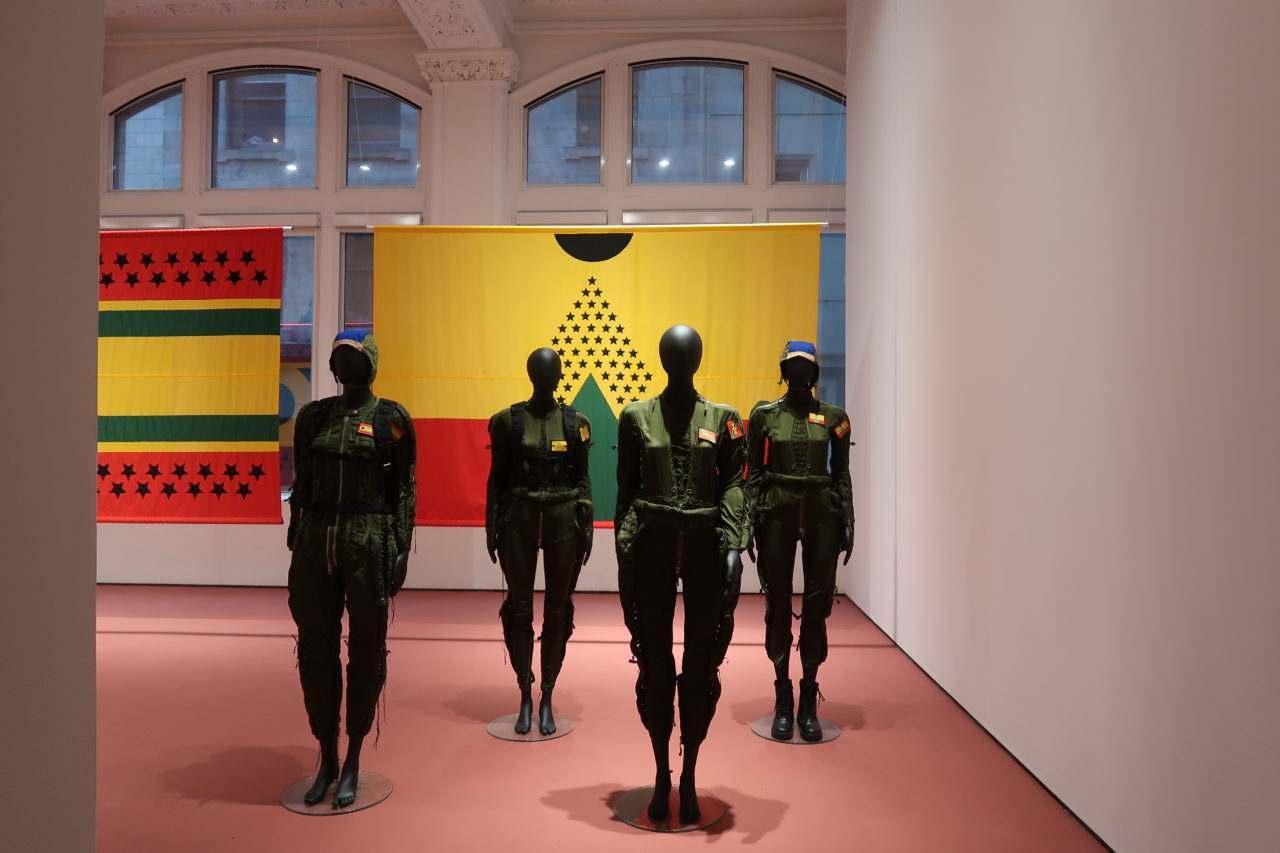 AN IMMERSIVE AND MULTIDISCIPLINARY EXHIBITION

For British-Ghanaian Larry Achiampong’s first solo exhibition in the Americas, the PHI Foundation for Contemporary Art presents Relic Traveller: Where You and I Come From, We Know That We Are Not Here Forever. Taking the form of a series of three closely linked immersive installations, specially conceived for the Foundation’s spaces and for the city of Montréal, this exhibition is composed of sculpture, images, film, and sound and includes a public art component. For example, certain installation components punctuate the passage of time and seasons. On the one hand, throughout the exhibition, we notice an intervention on the ground that the artist had painted in red to evoke the land of Ghana. Over time, the footsteps of visitors will rub off the paint, making different paths visible. Also, the lighting in the windowed room of G6 oscillates between natural and artificial light throughout the day to respond to the changes outside. 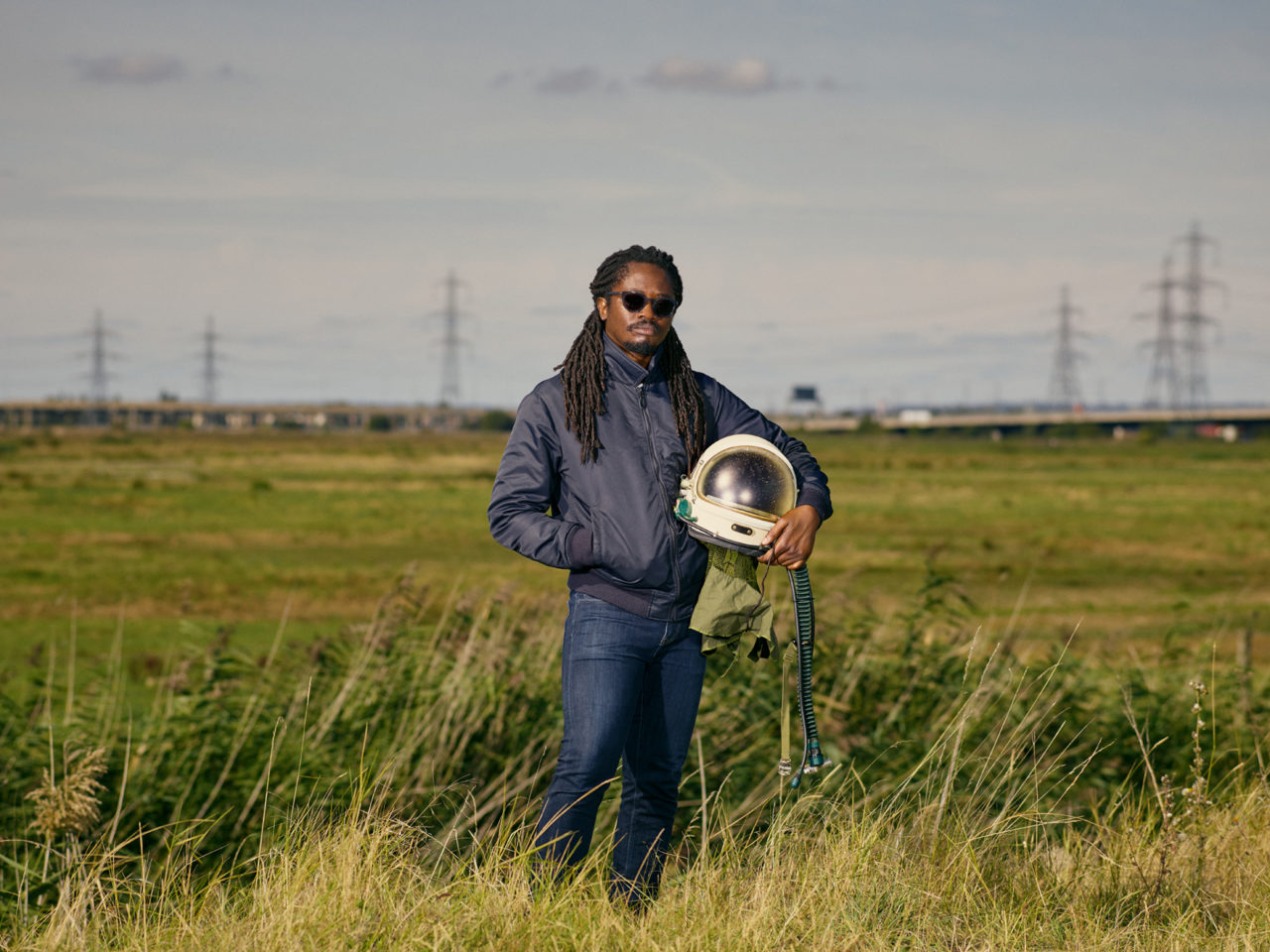 HIS ALTER EGO: THE RELIC TRAVELLER

Through his futuristic alter ego, Larry Achiampong examines his diasporic experience and its relationship with his personal and communal heritage. In the process, he becomes a living archive, forging connections with his roots and giving voice to the collective memory of those who have been historically oppressed, particularly people of African descent. His project Relic Traveller prompts us to ask, what marks and shapes history? Who has the right to leave a trace? Who has the right to share their experience and thus imagine and build a common future?

In developing his science fiction project Relic Traveller, it was important for Achiampong to invent his own terminology, or “Sanko-time” as he calls it. This concept draws on his Ghanaian heritage and the Ashanti tradition of sankofa, which means “to go back for what was left behind.” “Sanko-time” brings together two words: “time” and “sankofa.” Sankofa is a Twi word from Ghana meaning to go back and retrieve something that may have been lost or forgotten, or something that is known but needs to be revisited in order to make sense of the present or pave the way for the future.

The Relic Travellers that you can see in the exhibition are from a future where Western countries are in decline under the yoke of nationalism. Meanwhile, the Pan-African Union has entered a period of new prosperity, harmony, and independence. Although Pan-African unity has been achieved in this vision, Achiampong does not depict a utopian future, but rather a moment in time that affirms how important it is for everyone to take responsibility for healing the wounds of the past suffered by African ancestors.

In this crucial period, the Pan-African Union is developing a series of initiatives to help build a future where justice can be achieved through healing. In one of these initiatives, The Relic Travellers’ Alliance, the Pan-African Union dispatches multiple Relic Travellers on missions around the world. Equipped with time-travel technology, they are tasked with respectfully listening to and collecting the oral histories of people from the past, especially those in the African diaspora who have been exploited and oppressed by political systems such as colonization, capitalism, and globalization.

The exhibition introduces us to two major aspects of the artist’s cosmology: spacesuits and flags. Specially designed by Achiampong, the spacesuits suggest a tension between the agency of a body in flight and resistance to the tenets of ethnographic display. The spacesuits are brought into conversation with the series of flags PAN AFRICAN FLAGS FOR THE RELIC TRAVELLERS’ ALLIANCE (2017-2021). The 54 black stars on the flags represent the 54 countries of Africa. The green color represents its land, the black its people, and the red the struggles the continent has endured. The field of golden yellow represents the start of a new day and prosperity for the Pan-African Union.

The exhibition also showcases the Relic film series, including Relic 0 (2017), Relic 1 (2017), Relic 2 (2019), and Relic 3 (2019). This series is an essential component of the Relic Traveller multidisciplinary project. Set in different landscapes and locations around the world, they invite us to follow the Relic Travellers as they listen to, retrieve, and process the traces, stories, and accounts of various members of the African diaspora from the past. These mesmerizing shorts offer poetic, poignant narratives recounted by anonymous characters, set against a haunting backdrop of electronic music composed by Achiampong. 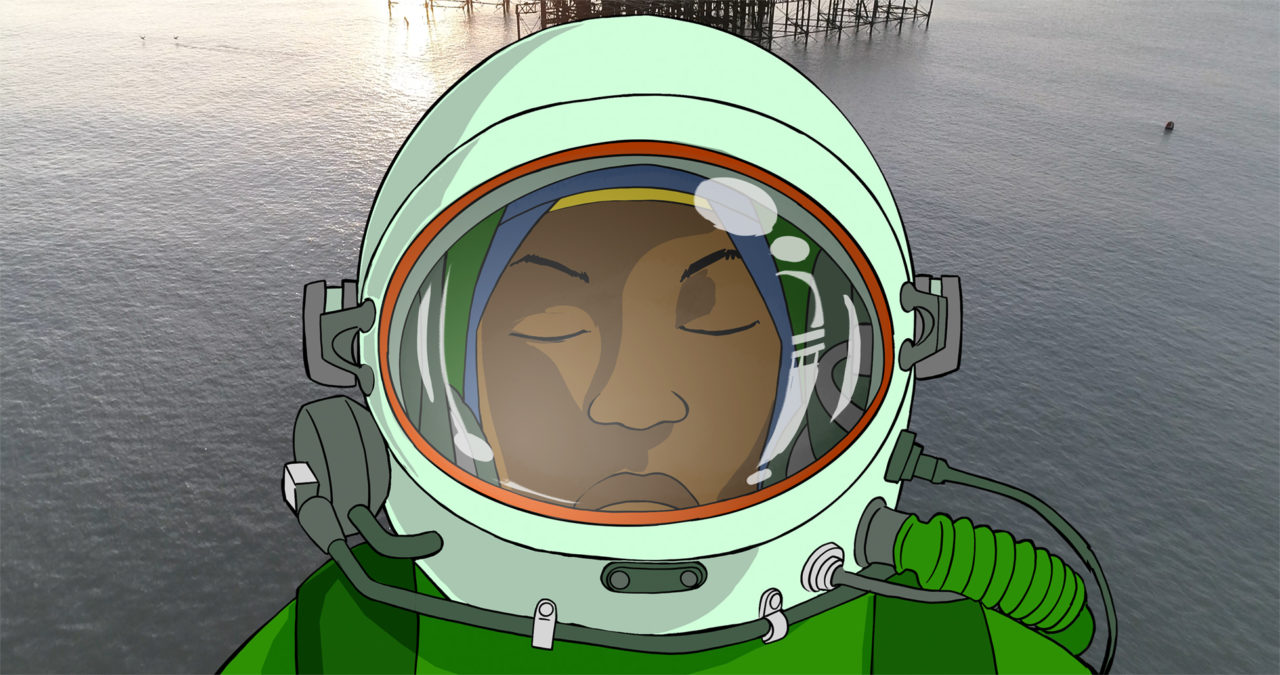 A new work, Reliquary 2 (2020), is presented along with the Relic series. This film is a meditation on the period of separation between Achiampong and his children at the onset of the COVID-19 pandemic. In the film, the artist looks at his own family’s story during the pandemic as well as the trauma wrought by the forced isolation and separation during this unprecedented time. Speaking directly to his children in the film, Achiampong offers up an archive of poetic and contemplative prose about a surreal and challenging time.

By engaging in this intergenerational dialogue with his own children, Reliquary 2 is a way for the artist to address the present day with a level of consideration and dignity not seen in the way his ancestors’ stories have been treated.

Insights into Listening to Ancestors within the Circularity of Time

The Memory of Water: The Visual Poetry of A Steep Path

This poetic essay is the result of a co-creation project between Méshama Rose Eyob-Austin and Marie-Hélène Lemaire inspired by Jamilah Sabur’s work A steep path. It takes the form of an introduction followed by a water poem in two voices that explores the theme of
Read More
Related Exhibitions