Joy and kindness and grief,
None are longer than brief,
And hesitate like the trace
Of a softness against a face.
—Edwin Denby [1]

Edwin Denby, influential American poet, writer, and critic, whose career spanned a thirty-year period in the mid-twentieth century, wrote extensively on the meaning of dance. He was particularly interested in plotless choreography, a notion that was also central to choreographer George Balanchine's work. In his writing, he, like Balanchine in his choreography, strived for a democratic approach, one of simplicity and purity.

Denby and Balanchine come to mind when thinking about Lee Bae’s artwork for multiple reasons. There is Bae’s aesthetic of minimalism and simplicity in his use of charcoal, arguably one of the humblest and most democratic artistic media; there is an emphasis on gesture, a gesture that is choreographed and practiced, memorized and repeated; and there is a strong relationship to the passage of time, be it a trace of charcoal in the artist’s performative act, a passing emotion in the excerpt from Denby’s poem, above, or the ripple of one of Balanchine’s dancers in motion. “When I work with a brush and with my body,” Bae states, “I work with time. This is the most important thing. Gesture is time.” [2] Time, for Bae, is constantly moving forward but also looping in a cycle, like the natural world which is so dear to the artist. Time consists of repeated movement. Time follows memory back to its roots.

In a grand, sweeping motion, a trace is made. Then another, perhaps the same, and another, circling in serial interdependence. The body follows its memory of the previous gesture, and continues, repeating, perfecting. In a choreography of form, marks are made. Unassuming marks, modest marks, feigning spontaneity but building on years of work and thought, practice and memory. This is part of its beauty and intrigue. Untitled (2019) is made with charcoal on paper. The work is large, measuring approximately 260 x 190 cm, and brings to light the discreet exploration of movement and form that is possible with pure charcoal. Bae creates dozens of quick sketches every morning, without planning or thinking, simply by following the memory of past gestures that his body has made, that his body knows. Then he selects the gesture that pleases him and recreates the final trace in one singular motion. Always relying on time and memory, the series of works that Untitled belongs to shows the unique, quiet trace of charcoal. 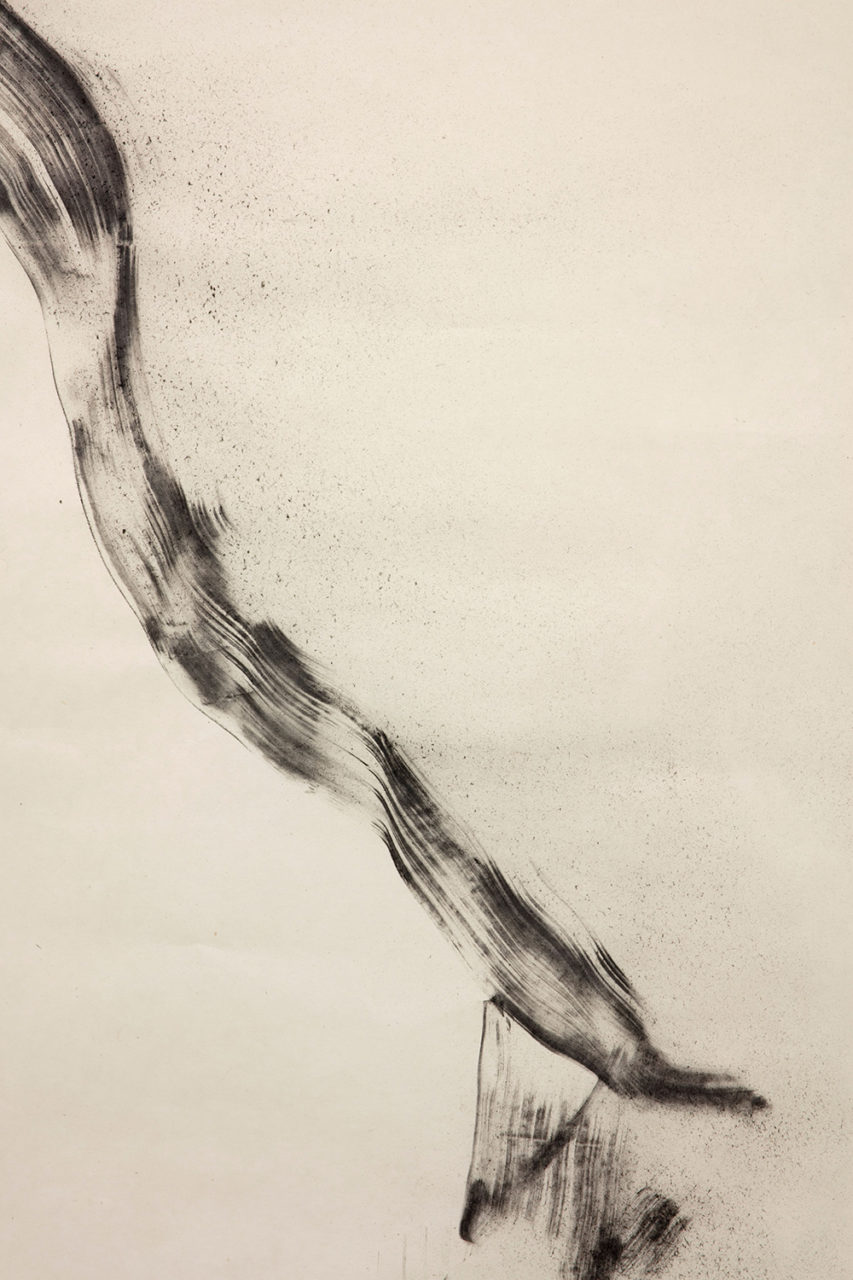 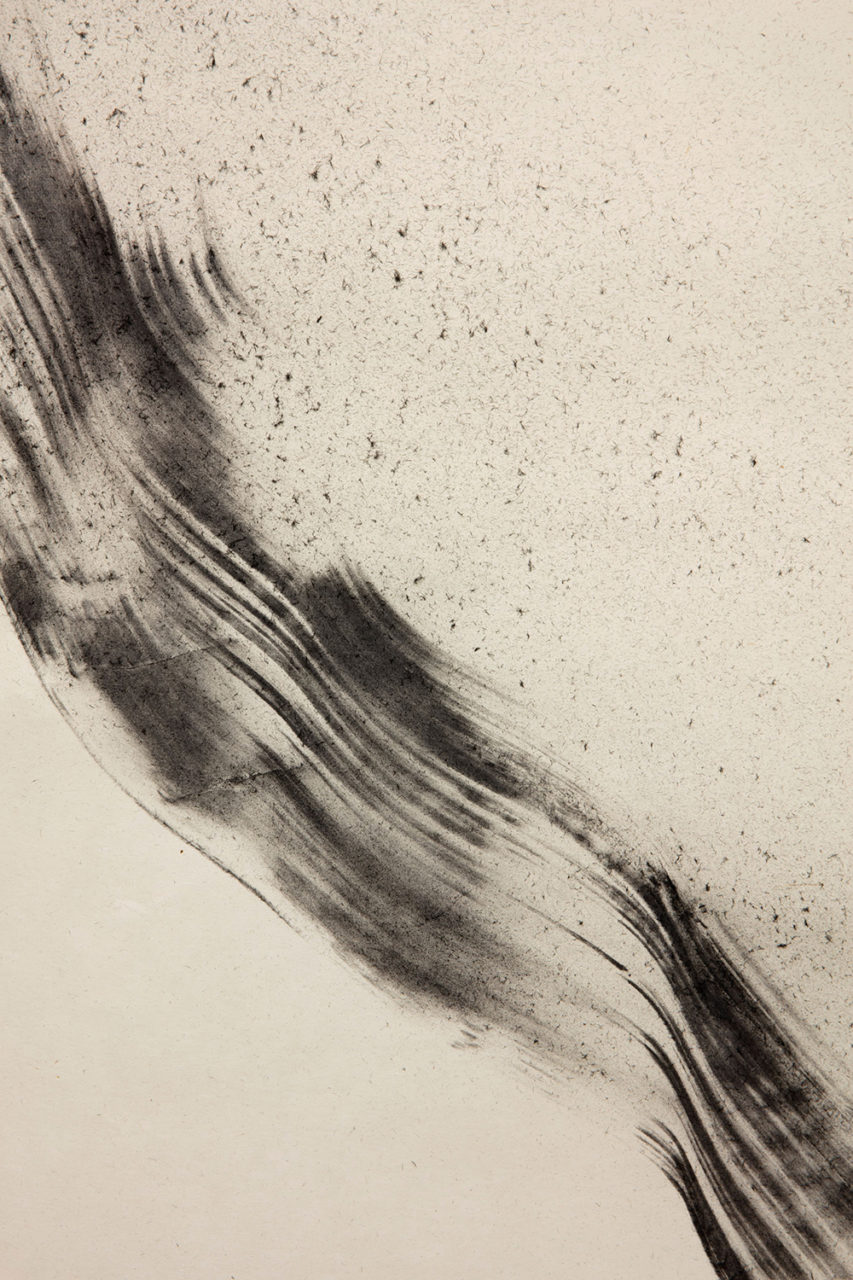 Whether selecting trees to burn for Issu du feu (2018), assembling sculptural replicas of the persimmons that he grew up with for Untitled (1999), or creating charcoal landscape paintings such as Landscape cn13 (2001), there is a repetition of movement, and a constant memory of those movements deep in the artist’s body. As Denby and Balanchine celebrated pure movement without the distraction of story, Bae emphasizes the gesture first, and, only later, the concept. This process that he follows in thought and in action is unwavering, like the steadiness of his hand; like the profound knowledge that gesture is time, and movement is memory.

Movements: Lee Bae is a tool designed by the PHI Foundation’s Department of Education to encourage visitors to develop and elaborate on some key concepts of the exhibition Lee Bae: UNION.

By Pohanna Pyne Feinberg Educator and Project Manager Movements: Lee Bae is a tool designed by the PHI Foundation’s Department of Education to encourage visitors to develop and elaborate on some key concepts of the exhibition Lee Bae: UNION. Upon entering the exhibition
Read More

Lee Bae. Distinguishing Traces From the Past.

By Daniel Fiset Adjunct Curator – Engagement, PHI Foundation Movements: Lee Bae is a tool designed by the PHI Foundation’s Department of Education to encourage visitors to develop and elaborate on some key concepts of the exhibition Lee Bae: UNION. Inspired by
Read More

An Introduction to the Artist Lee Bae